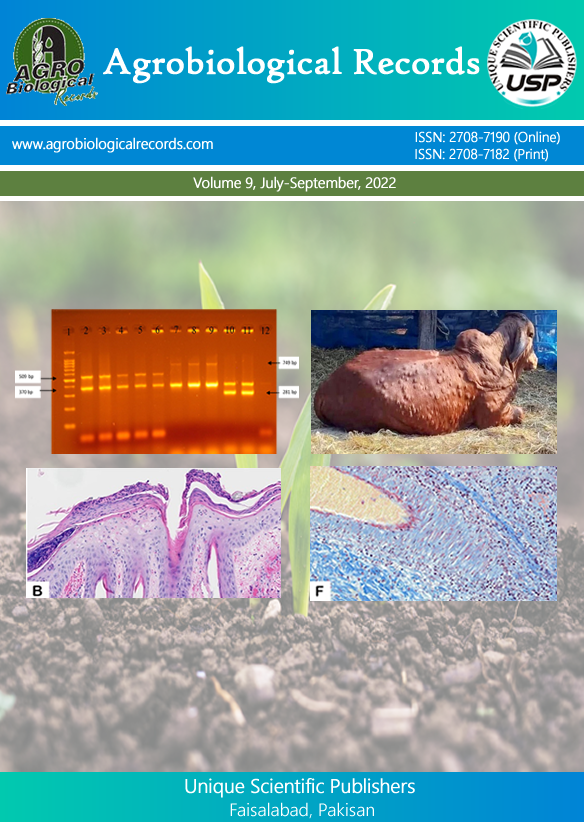 LUMPY SKIN DISEASE: A THREAT TO THE LIVESTOCK INDUSTRY - A REVIEW

To Cite this Article :

Lumpy skin disease (LSD) could cause huge economic losses to the farmers. It is a major obstacle to the international trade. Lumpy skin disease virus (LSDV) belongs to genus Capripoxvirus. The LSD causes substantial decrease in milk yield may be from 10% to 85% (no conjunction). In Karachi (Pakistan), milk and meat sales have been hampered by 60% to 70% because of LSD. All breeds and ages of cattle are involved, however, cows in peak lactation and young ones are more vulnerable. The LSD epidemics mostly occur in hot and humid environment at that time majority of the insects are active those acts as vector/insect species. Wildlife could promote the spread of LSD. The clinical picture of the LSD includes nasal discharge, inappetence, fever, lachrymation along with salivation and inflamed lymph nodes, body weight loss, and occasionally death. The LSD is described by slightly elevated, firm, demarcated skin nodules (2-7cm in diameter) that are typically spread all over the body. Morbidity varies from 0.75% to 100% whereas mortality is mostly low (0 to 7%). Tissues of digestive, respiratory, and reproductive tract show lesions. Secondary complications of serious LSD could be mastitis, pneumonia, keratitis, lameness, dysentery, and myiasis. Under a microscope, in skin nodules eosinophilic intracytoplasmic inclusion bodies in the keratinocytes are considered as pathognomonic. The LSD doesn’t belong to the zoonotic diseases. Milk and meat from infected animal are reliable and safe for human consumption. It is urgent to opt strategies for the control and prevention of the disease. Restricted movement of infected animals is a major factor in the transmission of the LSD in the non-endemic area. Curtailment of vectors/insects is also proposed for the control of the disease. Additionally, vaccination/immunization with the homologous strain of the LSDV could be the best strategy for the control of the disease. Diagnosis has also prime importance that should be prompt and precise especially in the endemic areas has prime importance so that control measures could be opted well in time for the curtailment of the LSD.